2020 was particularly difficult for low-volatility strategies, with the crisis impacting several traditionally stable sectors such as Transportation, Insurance and Commercial Real Estate. Next, last quarter’s announcements on vaccine efficiency resulted in markets accelerating to record highs and leading to a significantly unfavorable period and serious underperformance for less risky stocks. At the beginning of this year, by May 14th, our Seeyond Europe MinVol (SEMV) returned a +8.4% performance against +12.3% for the MSCI Europe NR[1] index. In a context of rapidly improving conditions and economic outlook in the first months of 2021, the pace was set for a continued outperformance of cyclical, value and high beta themes. In this note, we take a look at the evolution of the fund's positioning and share our thoughts on the dynamics and prospects of our strategy in a highly contrasted market.

To provide some level of context within the current market configuration and analyze its impact on our forward-looking positioning, two perspectives are to be considered: 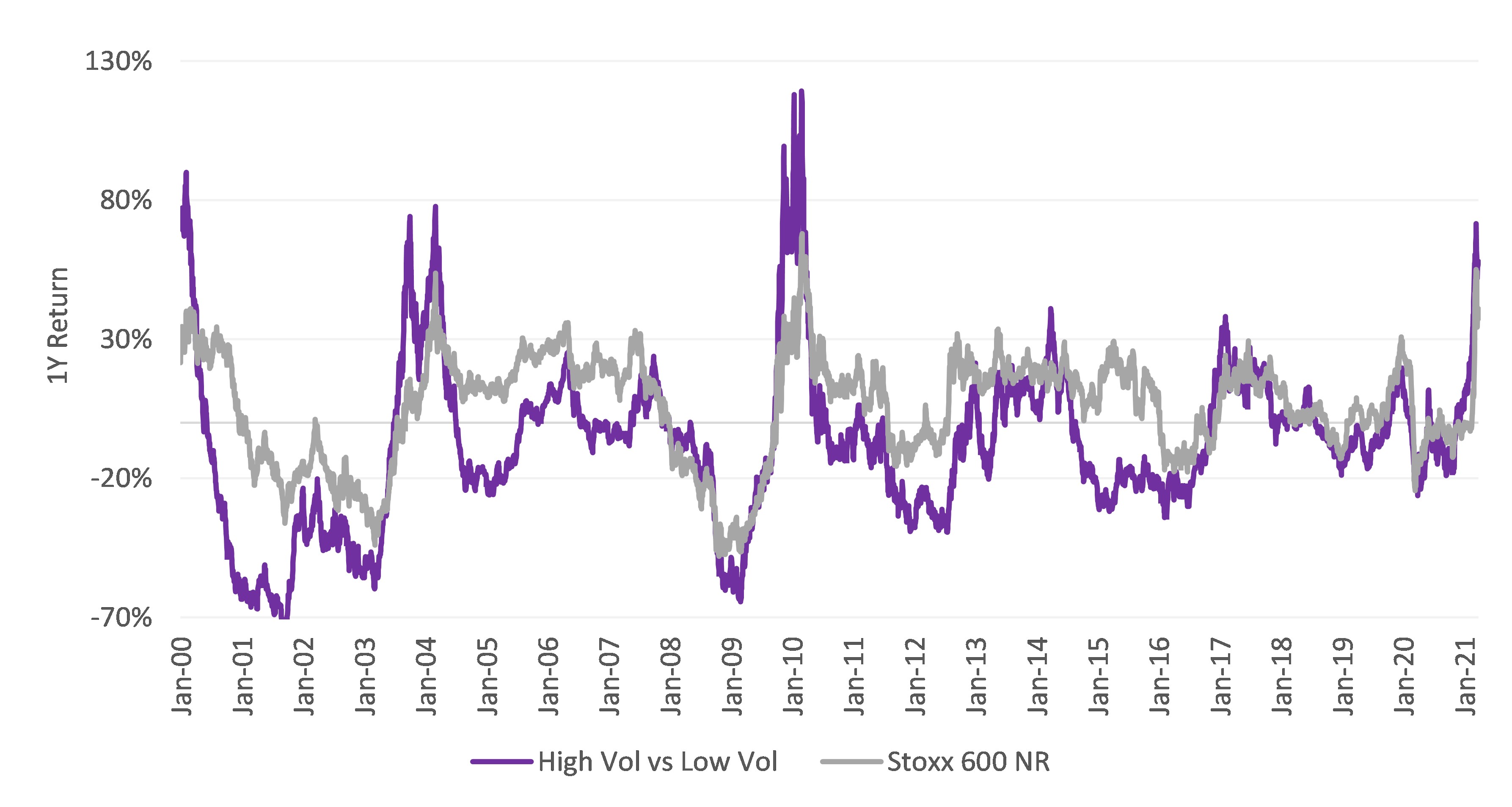 One must beware not to excessively rely on any similarity between the current market situation and previous cycles. Nonetheless, a quick look at the past 22 years (taking the strongest increases in High Vol as a starting point), shows a mean one-year outperformance of Low Vol relative to the market reaching 10%, against 5% over the entire study period. Also interesting: this catch-up of Low Vol doesn’t necessarily come with a bearish market. Opposite, the mean performance of the index not only is positive (+10.5%) but is also higher than the mean growth of the European market (+4.7%) over the long term (Fig.2).

By late March, over a one-year period, cyclical stocks had outperformed defensive stocks by 60%. A new record amongst many others, following 2020 with its extreme performance gaps. The sharp performance of cyclical companies was underpinned by strong fundamentals and record profit adjustments, though this trend seems increasingly stretched in view of the relative valuation levels. Based on one-year forward P/E estimates for example, the valuation premium of cyclicals versus that of defensives tops historic highs. At the end of March, it was over 25% versus a long-term median close to -18% (Fig. 3). In one year, the rotation out of defensive stocks has exceeded in amplitude and speed the one from the end of the 2008 financial crisis. 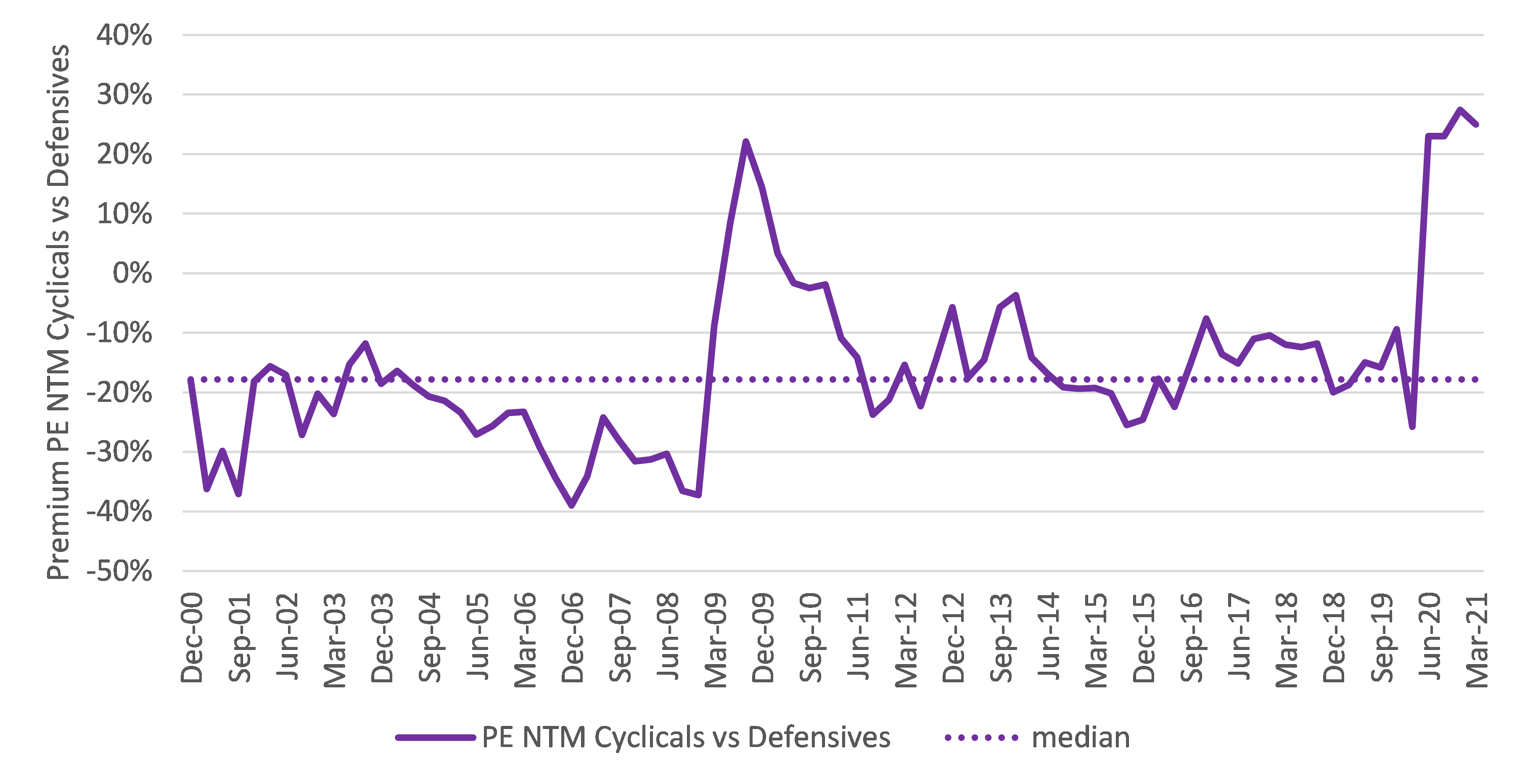 Lately we have received questions about the underperformance of defensive stocks and on the conditions under which it could last. To answer these, we need to consider two specific features of this exceptional crisis. First, a starting point with a spectacular decline in activity… unseen before in times of peace. Secondly, a monetary and fiscal plan which is only comparable in scope to the initial fall of the productive apparatus. Though production activity remained very far from pre-crisis levels, these two conditions brought together made a recovery possible… at an accelerated growth rate. Diffusion indices tracked these improving conditions, setting the pace for sector and factor rotations (Figure 4).

Over the recent years, markets have reminded us of this: valuation levels are never the sole catalyst of future performance. However, in an economic environment with much stronger and shorter cycles since the beginning of the crisis, a softer continued rise in yields combined with a slowdown in the growth rate should henceforth favor an easier transition towards defensive themes, as comparable figures progressively normalize. 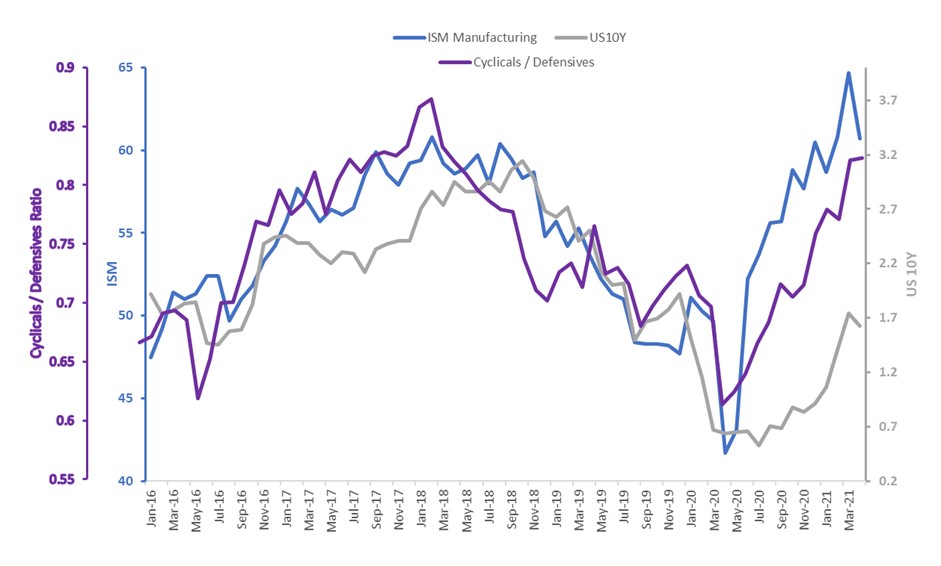 Unlike traditional factors such as value or momentum strategies, the performance and alpha dynamics of low volatility strategies remain less familiar to investors and more difficult to apprehend. Often reduced to a directional bet, not only is their use much more recent, but their contrarian low beta profiles are, unfortunately, difficult to carry… and even more difficult to ' time '!

In the recent context, we nonetheless identify different scenarios leading us to have a more constructive view for our strategy. After having experienced a record year, today’s market must not only face significant conditions of fragility (leverage levels, valuation, low liquidity), but also a normalizing economic situation. In a somewhat paradoxical manner, this gradual normalization would simultaneously mean an end to the crisis and the catch-up of less volatile stocks. By way of comparison, this situation reminds us of 2017, after the very strong market rotation from the end of 2016.

Several elements, if confirmed, lead us to believe that this transition is approaching. In a still very bullish market, the outperformance of defensive stock in March 2021 didn’t go unnoticed. With reopening schedules becoming clearer, questions about financing these various stimulus plans are coming up and, specifically, the calculation of long-term growth estimates which are implied by current high valuations levels. In addition, we are witnessing an improvement in the diversification benefit of our fund in the context of a factor allocation.

Indeed, the 2020 was also a year of heavily polarized performances and the absolute correlations between factors reached new peaks which impaired our diversification capabilities. Over the past few weeks, our MinVol strategy has gradually moved away from this binary dynamic, similarly to 2017 (Fig. 5). Beyond valuation aspects and relative spreads between different market segments, we are carefully monitoring this last point, for it is fundamental in the generation of long-term alpha. 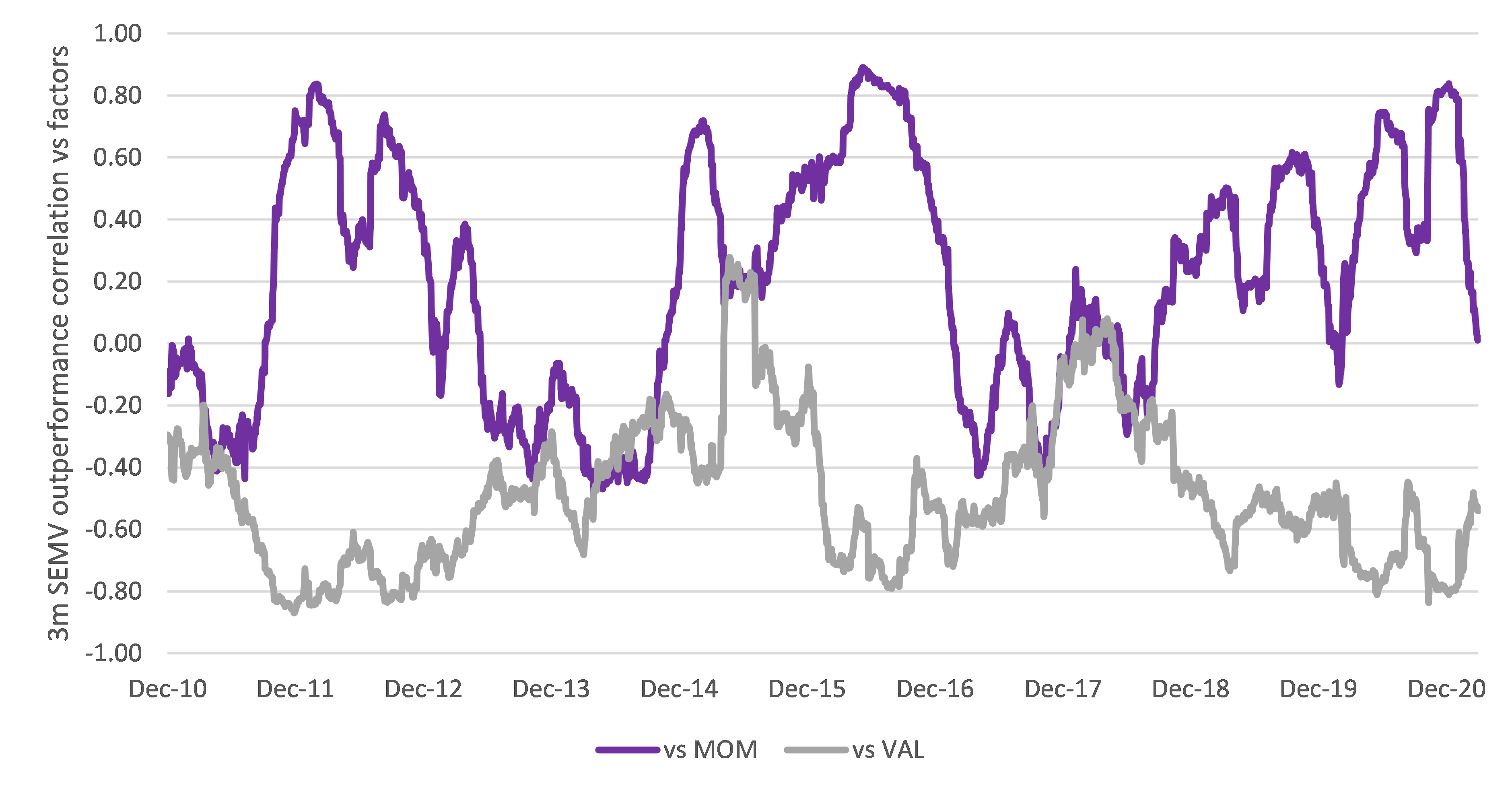 [1] Source: Seeyond. Net performance as of May 14th, I Share. Figures refer to previous years. Past performance does not guarantee future results. Such performance has been adjusted to reflect the different expenses applicable to the Sub-Fund