Marketing communication. Please refer to the prospectus of the fund and to the KIID before making any final investment decisions.

Seeyond Europe MinVol is a sub-fund of the Natixis AM Funds SICAV domiciled in Luxembourg and authorized by the financial regulator, the CSSF as a UCITS.
The management company of these sub-funds is Natixis Investment Managers International and the delegated investment manager is Seeyond.

Equity Insights - MinVol in cycles out of synch

2021 was a year ruled by COVID, where every aspect in life followed the curve of the pandemic. The start of 2022 takes us back two years, bringing back the impression that the whole world has changed in just a few days. The Russian attack in Ukraine has taken place in an economic context that is certainly not a product chance: inflation levels at a 40-year high, desynchronized global growth rates affected by notoriously heterogeneous normalization processes, both monetary and fiscal. Much like COVID, the Russian invasion and its wake will be identified as turning points in history. From an economic perspective, however, the two events only accelerate the rooted trends already in place.

In the present note, we wish to outline the context of this new crisis, defined, from our point of view, by the opposition between a monetary cycle that has remained very accommodating until now and the slowdown - and normalization - of a stronger, yet also shorter, economic cycle. In an environment that remains dominated by contrasts, we will share our analysis of the current market situation as well as the outlook for our strategies for the months to come.

2021 May, in our note The Case of MinVol1, we highlighted the differences in performance and valuation between cyclical and defensive strategies and more generally between the most and least volatile ones. In view of the extreme levels reached with economic activity indicators also at historic highs, we insisted on a gradual change in market conditions which could henceforth be favorable to our MinVol strategies, in a context still buoyant for equity markets.

From the time of our analysis, between the end of April 2021 and March 2022, the MSCI Europe has increased by +7.12%. At the same time, the Low Vol basket made up of the less volatile stocks posted a performance of +10.64%, outperforming the index, as well as the more volatile stocks (-18.25% over the period). This same result holds in the U.S.: the MSCI USA shows a +7.80 % increase while the Low Vol is at +10.44% and the at High Vol -20.55% (Fig.1). This catch-up is mostly technical, given the significant performance gaps apparent following the 2020 rebound, when all risky themes outperformed significantly. This same behavior was observed in 2004 or 2010, phases also characterized by the continued rise of the market following a strong initial acceleration. More important still, this catch-up is coincidental with the slowdown in the growth of the economic cycle which, in view of the activity figures and diffusion indices, should have peaked in the second half of 2021. This growth rate should continue its convergence path towards a long-term trend and the speed of this convergence is a central question investors must answer to orient their allocations for the coming quarters.

The economic impact of the fiscal and monetary measures taken by the various governments at the dawn of the epidemic crisis is clear. The manufacturing recovery was very lively and helped boost services and employment. However, the historical level of support efforts and the persistence of the pandemic have led to an asymmetric recovery, a destabilization of supply chains and, more generally, to changes in consumption patterns. Faced with production limits, the industrial cycle underwent a very strong rebound, but also reached its climax quicker. The inflationary cycle has followed the same upward trajectory but has settled more consistently at high levels while activity in services returns to normal and, in general, price increases take root in consumer expectations.

As mentioned in the introduction, considering the current economic context, the crisis in Ukraine acts as an accelerator of the forces already in place. The latest OECD calculations estimate an initial negative impact on global growth of more than 1% (Fig.2) and an additional delay for the downturn in inflation, now revised upwards by 2.5% over one year. Understanding this dynamic is essential because focusing on this dual growth/inflation axis historically gives us a relevant reading grid to understand the behavior of equities according to their volatility and therefore of our MinVol strategies. In Figure 3 we compare the annualized performances, both in the United States and in Europe, of the Low Vol, High Vol and market portfolios, according to the trends2 observed on growth and inflation. 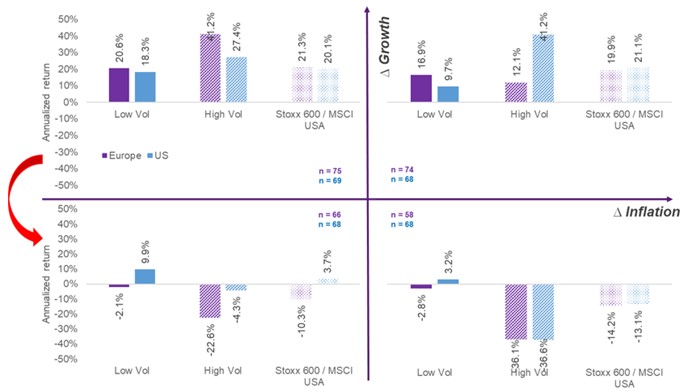 Figure 3 – Annualized net returns between 1998 and 2021. The inflation trend is based on the CPI (US) and the MUICP All-Items (Europe). The growth trend is based on the evolution of the OECD CLI corresponding to each of the two zones. Performance is gross of transaction fees. n: number of monthly observations. Sources: OECD, Seeyond, FactSet, Bloomberg. Figures refer to previous years. Past performance does not guarantee future results.

We see how the move into the economic deceleration phase, depicted in the bottom two quadrants, is particularly important in understanding performance gaps between riskier and less risky stocks. While during periods of rising growth the dynamic is very buoyant for the equity markets and the more volatile equities outperform thanks to their leverage effect on the market, in phases of slowdown all the relationships are reversed, and it is less volatile stocks that have the advantage. Crucially, inflation regimes do not alter this symmetry. Their impact is much more pronounced geographically, particularly among more volatile securities, which is partly explained by very different sectoral compositions and the better performance of US indices since the 2008 financial crisis3. 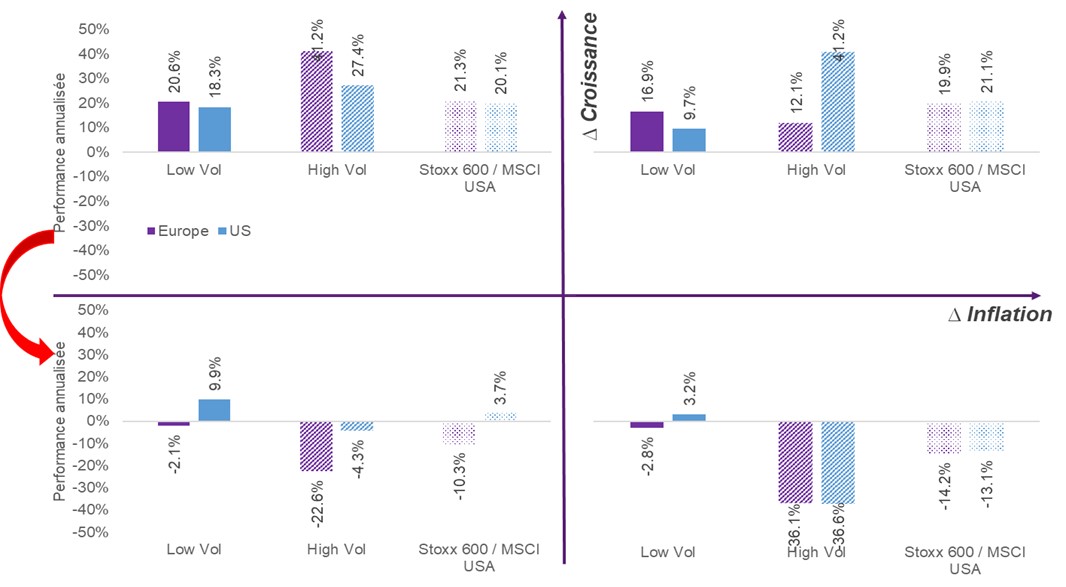 The December FED Minutes, released in early January, set the tone for the US central bank's policy shift, announcing a faster-than-expected move into tightening. This transition, which should have been gradual, judging by the market consensus at the end of last year, took on a whole new dimension with the continuation of the inflationary surge and, more recently, with the dramatic effects of the Russian invasion in Ukraine. In just three months, the market has gone from three anticipated rate hikes in the United States in 2022 to ten. In Europe, we went from a single rate hike before the end of the year to six. At the same time, the FED also affirmed its decision to proceed, starting in May, with the start of its policy of reducing its balance sheet (quantitative tightening) which could reach up to 95 billion dollars per month, or twice the maximum level of liquidity withdrawal implemented between 2017 and 2019. The pace of monetary tightening forecast today is unprecedented since the one adopted by Greenspan in 1994, which triggered a bond market crash and, by domino effect, a crisis in emerging countries (Fig.4).

Figure 4- FED hiking cycles since 1987. Sources: Seeyond, Bloomberg. March 2022.
2022 figures are based on predictions. The views and opinions expressed may change based on market and other conditions.There can be no assurance that developments will transpire as forecasted. Actual results may vary.

Normally it is common for phases of rate hikes to be concomitant with rising stock market movements. After all, the largest market declines are most often coincident with economic or financial shocks during which central banks have already begun work on monetary easing. However, as financial conditions deteriorate in these tightening phases, risk taking is also limited and the performance of less volatile stocks remains historically high. Following the same logic, and even if we only have a single sample, we will note that the results between 2017 and 2019, during the last cycle of quantitative tightening undertaken by the FED, match with this conclusion (Fig.5).

3. The return of diversification

After several years characterized by a historic market concentration, mainly in favor of US growth and technology stocks, recent macro-economic and geopolitical events mark the beginning of a break with a cycle that has been detrimental to diversification efforts. The considerably strong rise at the beginning of the year of securities exposed to inflation, and the outperformance of certain sectors (Communications, Utilities) and countries (South-East Asia, United Kingdom, Latin America), that had structurally underperformed since the beginning of the pandemic did not go unnoticed.

We are convinced that the cascading effects triggered by this new crisis, in a radically different economic context from the one of 2020, are particularly uncertain, and the investment reflexes learned from this last cycle may prove to be counterproductive. While the environment within equities remains dominated by the polarization of performance and the opposition between value and growth, the contribution in diversification offered by less volatile equities is, in our opinion, crucially important.

To illustrate this dynamic, based on a principal components analysis, we project different portfolios (factors, sectors, market) in the first two drivers explaining the outperformance over the past year in Europe and the United States. (Fig. 6 a. b.) 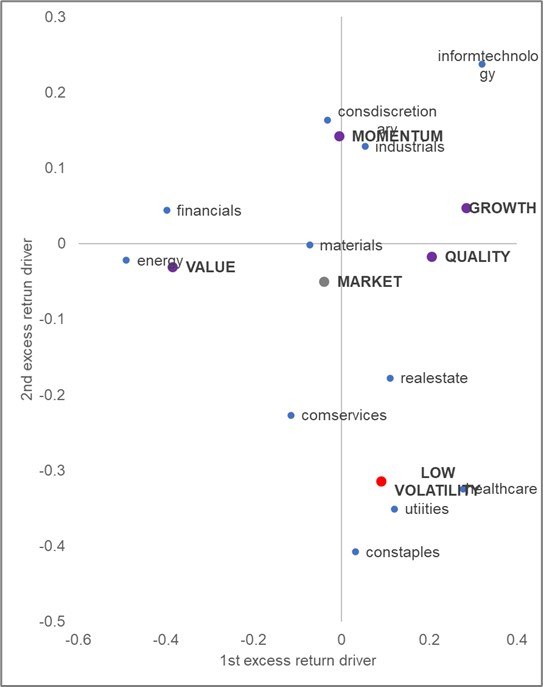 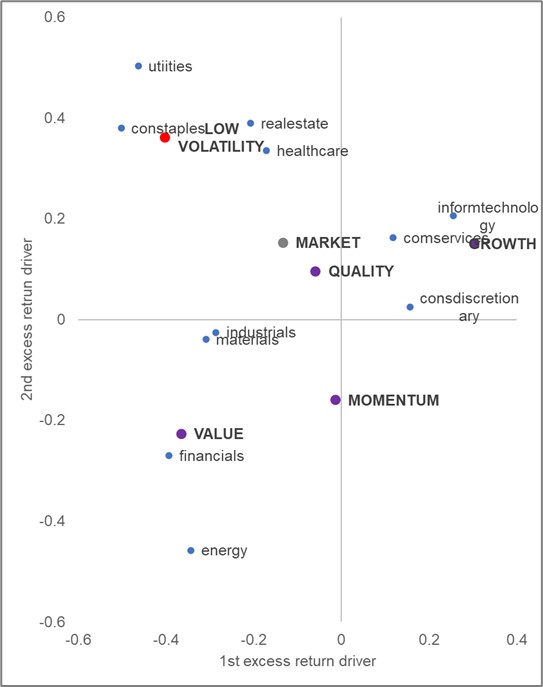 Figure 6 – Principal components analysis in Europe (left) and in the United States (right) based on daily outperformances over one year. Indices: MSCI Europe and MSCI USA. Sources : Seeyond, FactSet, Bloomberg. Mach 2022. Figures refer to previous years. Past performance does not guarantee future results.

In both cases we observe first a clear polarization between value and growth which, by its proximity to the first axis, shows its central aspect in the current functioning of the market. Secondly, the almost orthogonal juxtaposition of the less volatile stocks highlights the importance of their diversifying profile today.

We have tried in this note to identify the elements which, in our view, define the current environment and which will be the basis for the evolution of risky assets for the quarters to come. After a set of measures, unprecedented in times of peace, with which governments and central banks faced the arrival of COVID, today’s economic balance is fragile, defined by desynchronized business, inflation, and monetary cycles.

Our goal was to analyze the impact of each of these cycles separately: first on the markets, then specifically, on stocks according to their volatility. The performance of less volatile stocks demonstrates their historical ability to better weather phases of economic deceleration as well as those defined by a monetary policy of rising rates, including during bull markets.

The current crisis is already exceptional. It forces central banks to be restrictive in the face of a slowing economy. The crisis in Ukraine amplifies this situation while adding geopolitical uncertainties that we have not known for generations. As the world seeks a new balance and as the economic arcs on which globalization and the financialization of the economy have been built over the past forty years are called into question, we remain convinced of the pertinence of our strategies’ contribution to diversification.

[2] A negative trend is compatible with a positive economic growth

[3] An identical exercise can be performed from the inflation levels instead of their trend. The results are similar and the differences by regime between the United States and Europe are more marked.