When the laws of physics get involved... 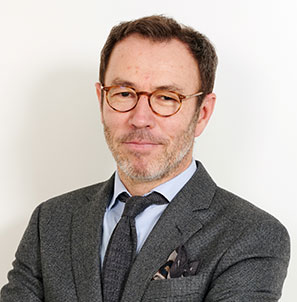 War is raging in Ukraine, the Russian army is stalling and the Ukrainians are resisting. The extent of the sanctions imposed by Western countries surprised Vladimir Putin, and raw material prices grew sharper. What was originally meant to be a quick “special operation” is turning into a long-running conflict. after 2 years of global health crisis, this war, of which we thought was from another time, will have a considerable geopolitical impact.

The excessive globalization of the world economy which was already dented by the Covid pandemic will struggle to maintain its momentum. High geopolitical tensions, lack of strategic sovereignty (medicines, energy, semiconductors, agricultural products, etc.) and the extreme fragility of a scattered and “just-in-time” production chain will lead to a reallocation of resource and a structural increase in inflation.

The United States are undeniably overheating. However, there is increasing discrepancy in confidence levels between large companies and SMEs. The latter follows a continuous downward trend over the last 3 years. There is also a large gap among consumers between the assessment of their present and prospective situation. 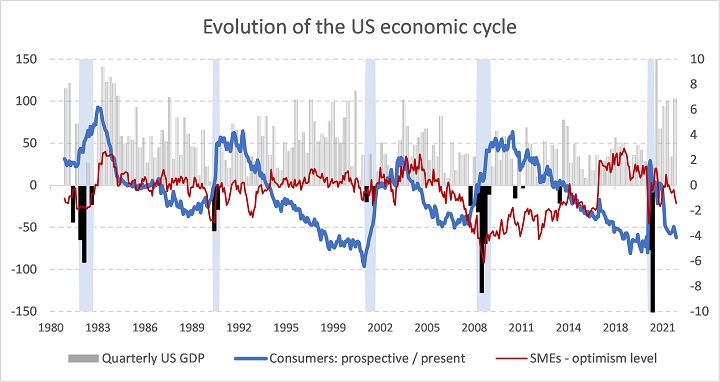 Historical data from 12/31/1980 to 02/28/2022. Sources: BLOOMBERG/Conference Board; Institute for Supply Management / National Federation of Independent Business.

Europe could legitimately hope to get the upper hand over the health crisis in 2022 despite growing inflation. The region will be particularly affected by the recent events which, on the one hand, are worsening tensions on commodities to which Europe is very sensitive, and, on the other hand, increasing uncertainty which is already having a significant impact on the confidence of economic agents. 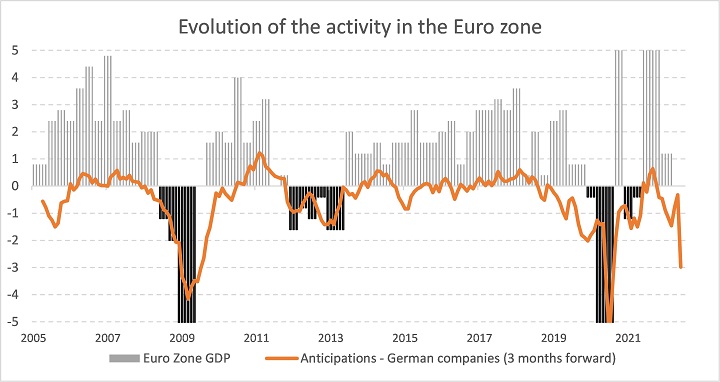 Finally, the situation in China is a cause for concern. The real estate and construction sector, representing about a quarter of GDP, is in crisis. The authorities are struggling to contain the depressive effects that the bursting of the speculative bubble is having on the rest of activity. With poor and weak protection against Covid, the sudden acceleration of infections is worrying. The « zero-Covid » strategy is no longer suitable and does not provide visibility on any short-term improvement in activity. Easing measures should however prevent growth from landing too hard.

As in the 1970s, a commodity shock accelerates an underlying trend that was just waiting to arise. With an underlying inflation index at 6.5% in March, price evolution in the United States has not experienced such a surge since the 1980s. For 15 years central banks and governments have flooded the markets and the economy with liquidity. And it was when the authorities succeeded to convince themselves of the harmlessness of these policies on inflation that 2 events turned everything upside down. The response to the health crisis of unprecedented speed and scale (massive injection of liquidity, stimulus or infrastructure plans) has revived the velocity of money. With massive recovery plans, large savings and investment needs (fast forwarded digitalisation of the economy, climate change), the considerable amount of dormant liquidity began to circulate even faster. With inflation following the same behavior as energy, the monster comes out of its lair and the fight is just beginning. 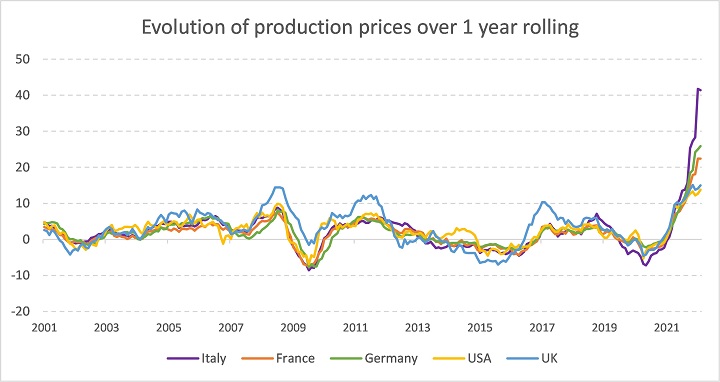 The Federal Reserve admitted they underestimated the strength of the recovery and the structural nature of inflation. The latter is now surging and will force the FED to go much further than what most investors are anticipating. Beyond the rate hike that has only just begun, the reduction of the FED's balance sheet should go faster and be more active than during the previous move in 2018. The resulting liquidity reduction will be an immense challenge for risky asset (equities, corporate bonds) but also for the government bond markets.

In Europe, inflation remains for the moment mainly related to the evolution of commodity prices. Wage pressures remain contained overall. But the second-round effects should not be long: wage increases cannot indefinitely lag inflation without social revolt and political risk. The ECB should therefore follow the FED and reduce the easing measures in the coming months despite the uncertainties around war in Ukraine.

Initially under pressure by the risks of an uncontrolled escalation of the conflict, equity markets recovered very violently in March supported by a strong momentum of the American economy and the investors’ strong defensive positioning. Not only was the recovery technical, it also differed from one sector to the other and was combined with an violent rise in interest rates. We must go back to 1984 to find a similarly sharp rise in US 2-year rates over a quarter. And remember that at that time, US 2-year rates were at nearly 12%, i.e. 2-year government bonds were generating around 3% of yield over a quarter (thus offsetting the impact of yield rise) versus almost 0% at the beginning of the year. 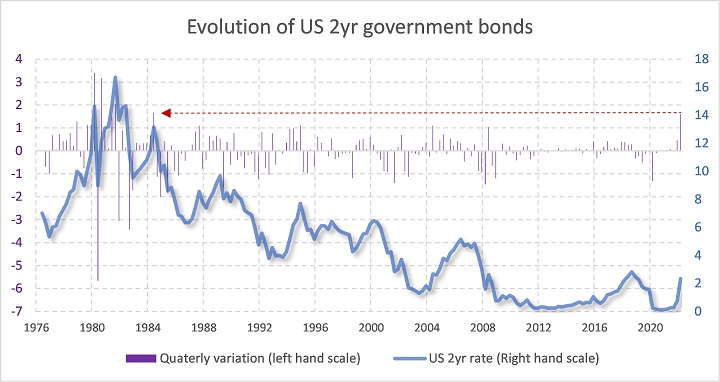 Undeniably, there are supportive factors… coupled with too much uncertainty to be ignored

Large companies in developed countries have rarely been in such a good financial situation: record margins and healthy balance sheets. But the double inflationary shock (Covid & Ukraine) will affect their profitability. And as we have seen, small and medium-sized companies are already affected by bottlenecks, hiring difficulties and rising production costs.

The situation of households is also less favorable than a year ago. Protected by exceptional measures during the health crisis, they were able to accumulate considerable savings allowing them (for the vast majority) to get through the crisis without too much difficulty and to revive consumer spending. The situation has changed. The extra savings have been consumed and the household debt level is back to levels like before the 2008 crisis. The rate rise, particularly on mortgages, should have a significant effect on household consumption and investment when real wages are falling. 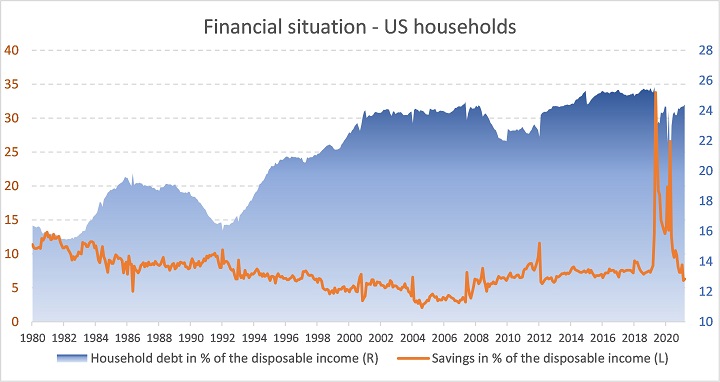 The absence of a short-term recession risk in the United States should encourage the FED to continue tightening financial conditions. The level of Equities and Fixed Income are an integral part of the equation, which means that a significant short-term adjustment seems unavoidable. This adjustment should materialize gradually, with rebound phases followed by a violent decline in equity markets, and structurally higher interest rates. Geopolitical tensions should also generate new stress. A defensive, yet selective and opportunistic investment approach therefore seems appropriate in a durably uncertain environment.

It will only be a second phase that in which will assess the impact of new monetary policies on economic activity. History teaches us that once inflation has taken hold, there is hardly any other solution than significantly slowing down growth. A necessary evil for central bankers to preserve the longer-term growth potential of their economies.

This article has been provided for information purposes only to professional and non-professional clients as defined in the MiFID Directive. The provision of this material or reference to specific sectors or markets in his article does not constitute investment advice or a recommendation or an offer to buy or sell any security. Investors should consider the investment objectives, risks, and expenses of any investment carefully before investing. Views expressed in this article as of the date indicated are subject to change and there can be no assurance that developments will transpire as may be forecasted in this article.