Biden, Yellen and Powell drive the new paradigm on growth & inflation. It’s up to the markets to adapt. 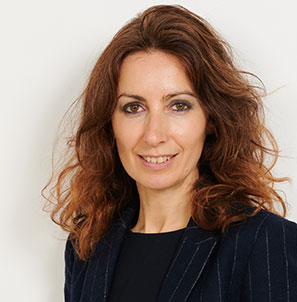 Biden, Yellen and Powell drive the new paradigm on growth & inflation. It’s up to the markets to adapt.

From AMERICA FIRST to AMERICANS FIRST

The United States never really recovered from the Great Financial Crisis of 2008. Certainly, the equity markets are at their all-time high and the unemployment rate fell to its lowest level since the end of the 60’s in late 2019, but these figures mask deep social inequalities, an increase in precarity and an impoverishing middle class. 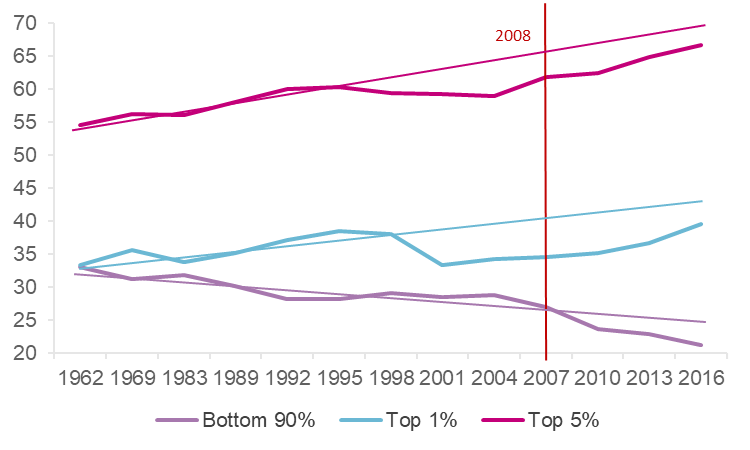 This situation is troublesome for several reasons:

By winning the presidential elections last November, the democrats made a promise to Americans: restore social peace in a deeply divided America. To do so, Biden, Yellen and Powell have a mission: put an end to nearly 25 years of deflation that have lowered US households purchasing power, deepened social inequalities and exacerbated tensions between communities.

To achieve this goal, they have three tools:

The idea is to create a significant shock on growth to enhance the country’s potential growth, as wages will structurally and gradually benefit from increasing household demand and the development of new promising sectors of activity.

Indeed, if inflation driven by stagflation is negative for the economy, some good inflation is needed to stimulate household demand and the corporate sector.

Inflation driven by a positive shock on growth is positive:

Inflation is a problem when input prices increase more than the demand, and pricing power declines, preventing any pass through of input prices into output prices.

What does it mean to the Fed?

We believe, Powell will let good inflation slip away on the short to medium term to create a positive inflationary spiral on both wages and investment. He shouldn’t modify his bias and the size of the Fed balance sheet till signs and risks of deflation have not definitely disappeared.

Therefore, it seems that there is no other solution than to taper late in the cycle and gradually. If long-term interest rates are to rise, the Fed will closely monitor the pace of appreciation and will be patient before raising the federal funds rates. In the meantime, inflation will have increased, maybe above 2%.

No imminent change in the monetary policy despite a gradual increase in inflation means that real interest rates shouldn’t increase too much and will remain attractive. Reflation doesn’t mean either stagflation, or hyperinflation. Reflation is a sign that stimulus packages are starting to work and marks the beginning of a new cycle.

Visibility on inflation is limited as many indicators tend to send contradictory signals.

We think these doubts will persist for a while and will prevent any imminent change in the monetary policy. The Fed won’t take the risk to jeopardize the recovery by tapering too soon as it did in 2013. 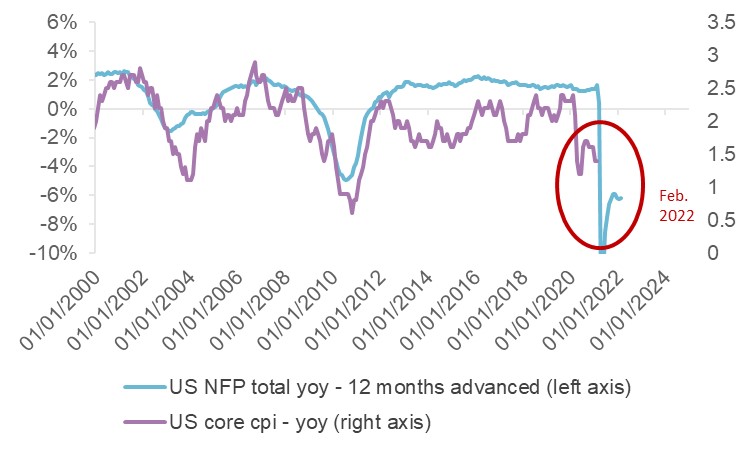 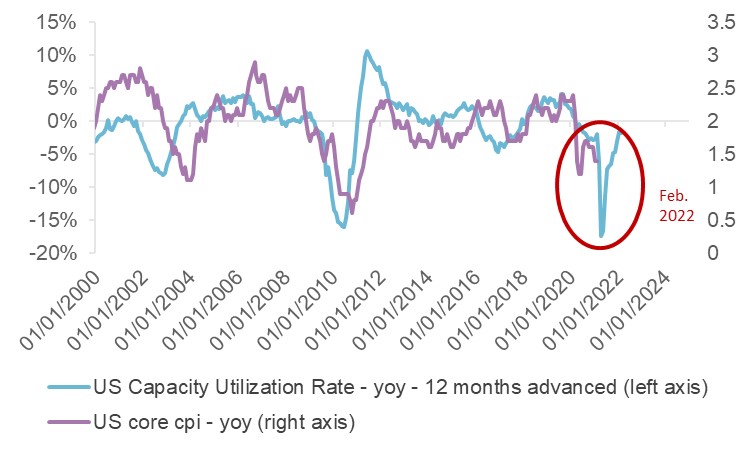 If the Fed is cautious regarding inflation on the medium term, what about the markets?

US nominal 10-year interest rates increased sharply recently, and so did the US 10-year breakeven yields (*), pointing to a sharp increase in inflation on the short run.  However, the message is different when we increase the horizon. The slope of the breakeven yields curve is in a negative territory since January 2021, and its dynamics (chart 4) suggests that inflation could temporarily exceed 2%, and then fall again below at least till the end of the year, requiring no immediate change in the monetary support. 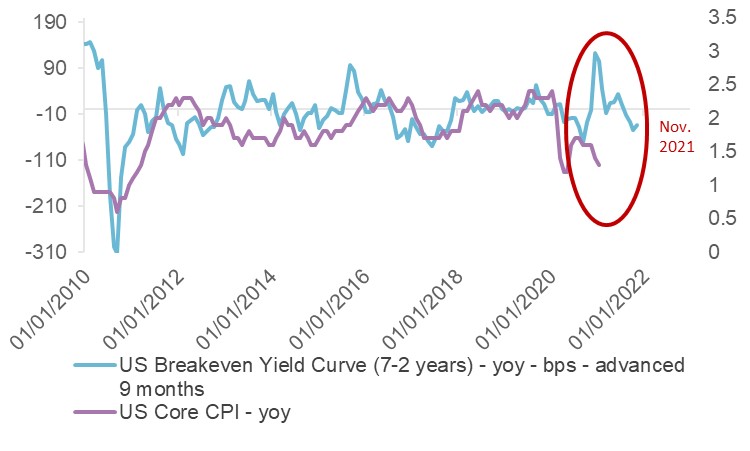 In a nutshell, both the Fed and the markets agree. Inflation will increase as economies reflate, but definitely more gradually that some investors fear. Yes, inflation is increasing, but the current level cannot justify any tapering from the Fed and its new philosophy. While long term interest rates should increase, the pace of the increase should slow down and could even be temporarily reversed (as new interest from investors could also emerge due to current levels of interest rates close to dividend yields). This scenario remains favorable to equities, credit, reflation trades and structurally negative for the US dollar.